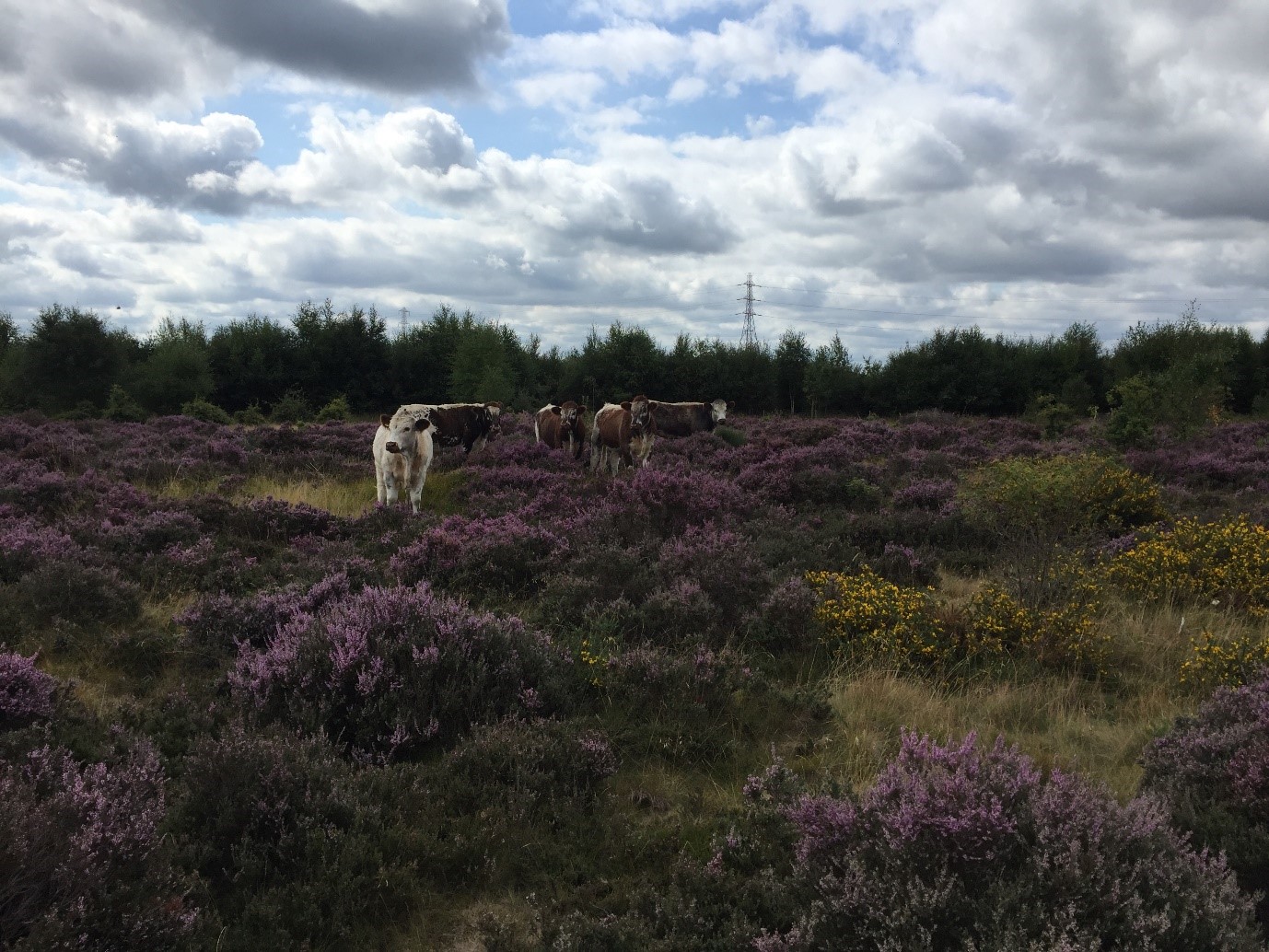 Over the last few years Staffordshire County Council, working with RSPB and Natural England, has been discussing and developing options for managing open habitats on Cannock Chase.

The options included types of management that have been used for many years on the Chase, such as cutting and controlled burning of heather, cutting and spot treating trees and scrub, and cutting and spraying bracken. They also included reintroducing grazing with livestock, which was the traditional way the Chase was managed before the Great War. This update from the County Council tells you what’s been happening, and the work planned over the coming months.

Grazing Pilot Begins
Spring 2020 sees the start of the grazing pilot scheme at Moors Gorse, Cannock Chase. This small area of heathland and woodland near the Visitor Centre will be grazed this summer by up to six traditional breed cattle.

Work will start in March with clearance work ahead of installation of fencing around the perimeter of the area to be grazed. The fencing has been located in amongst the vegetation to reduce its visual impact, and the area has been checked by ecologists, archaeologists and the AONB team to make sure it’s in the best location. Initially gaps will be left in the fence and gates will later be installed. There will also be special features to ensure deer and other wildlife can still get about easily.

Water troughs and handling facilities will also be installed and then later in summer a small number of cattle will be brought onto the site to graze the vegetation for a few months. This will help to more naturally manage the vegetation to create the best conditions to support a whole range of heathland wildlife. To find out more, click here

Heather Cutting
Over the winter heather has been cut on various parts of the country park. Much of our heather is quite old and cutting helps rejuvenate it. The aim is to get a range of age classes across the site as each age class supports different wildlife, or wildlife at different life cycle stages. Heather cutting has now finished – it is not carried out in spring and summer as birds will be nesting and must not be disturbed.

• Thinning young oak plantations – between 1975 and 1981 a number of oak trees were planted on Brocton Coppice. These trees have been thinned in the past and needed further thinning. This involves removing badly damaged trees or favouring healthy broad canopy trees so that they can have space to grow and form veteran trees in the future.
• Thinning birch around veteran oaks – some of the veteran trees were suffering from overshadowing by birch. There are a number of birch which have grown up around the edge of the canopies of the ancient trees, these then compete for light and moisture. These birch trees have been thinned to prevent the veteran trees becoming stressed.
• Heathland glades – there are a few areas of heathy glades that were starting to get encroached with birch regeneration. Some of the regeneration has been removed to preserve and enhance the diversity within the coppice

Invertebrate habitat
Plans to create bare ground habitat for invertebrates were severely hampered by the weather. The County Council will therefore pick this work up again later in the year.

This would be a forwarding message